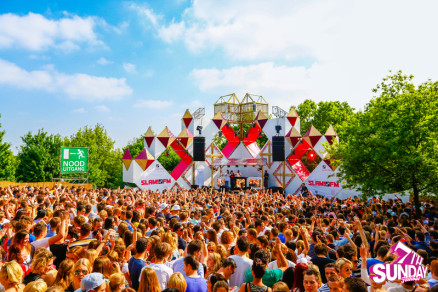 Once every year, at a magical place in a colorful jungle of lights, 7th Sunday Festival occurs, and thousands of fortunate people have the privilege to attend and create wonderful memories. 7th Sunday Festival offers a brilliant realization of the modern festival expectations visitors have nowadays. That magical feeling, with a sense of mystery, is what people seek and what lays hidden in the valley where this pearl is secretly kept. With great attention for detail and creating a lovely atmosphere where a whole day feels like a complete story, the vibe of the festival is always amazing. By creating this hidden pearl Par-T Events establishes a masterpiece every year, exactly 7 Sundays after Easter on Pentecost. The festival made a well-known name for itself in the South of the Netherlands and is becoming bigger in the rest of the country and worldwide. As result 7th Sunday was nominated for Best New Festival at the European Dance Awards in 2012 and received a nomination for Best Festival at the Dutch Gouden Kabouter awards a few months later. In the previous edition visitors from 10 countries experienced the magic and with the festival expanding every year, the possibilities are endless. The acts vary from Dance to Pop music, with House, Electro, Techno, Hardstyle and 90’s, which indicates the wide range of the dance music 7th Sunday Festival offers. The DJ’s are the hottest in the dance scene and they come from all over the world. There are twelve stages and this is where the DJ’s don’t attempt to make the crowd go wild…they actually do!