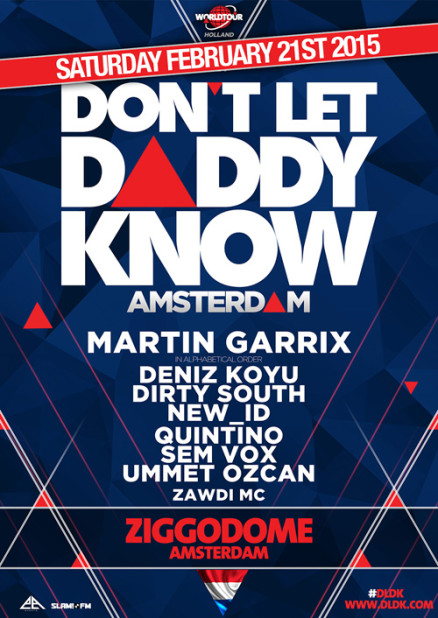 #DLDK returns to the Ziggo Dome Amsterdam on Saturday February 21 2015.

The past year DLDK continued creating turbulence and with the equivalent of an earthquake, DLDK has set foot on Dutch soil. With hosting the indoor mainstage at Mysteryland, and an epic sold out Ziggo Dome with Dimitri Vegas&Like Mike, Kaskade and Dannic to name a few, 2014 was an absolute unforgettable success. DLDK didn’t stop and announced the start of their world tour. DLDK took over the massive Sportpalace in Belgium and has successfully marked their territory in the Benelux.

Now the time has come for DLDK to start conquering more soil and ignite a global turmoil in the dance scene. More continents, more countries, DLDK will conquer the world and spread like a epidemic, next destinations will be announced soon.

Join us on this rollercoaster ride that brings you the most epic way of clubbing that has no parallel. Creating an extraordinary memory of the night and all that it captures fulfils every desire and expectation. DLDK offers you a sanctuary, a place with no limits, a place where you can lose control. Besides the music, the audience gets treated with a mind-blowing night out involving the best DJ’s, the most edgy decorations and ‘Don’t Let Daddy Know’ gadgets.

We will announce the line up soon. We can already tell you that one of the headliners is part of the DJ MAG top 10. Stay tuned…