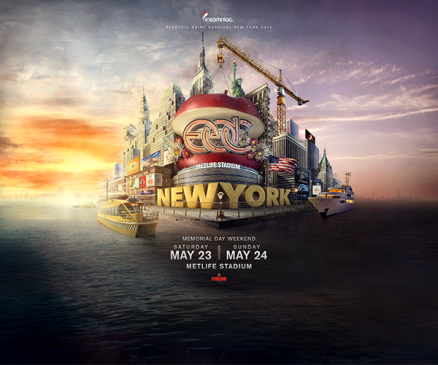 Annual Electric Daisy Carnival (EDC), New York will return to MetLife Stadium this Memorial Day weekend, May 23-24, 2015. With its over-the-top production, amazing fireworks displays, larger than life art installations, full-scale carnival rides and more, the show will once again transform MetLife Stadium into another world not to be missed as summer officially kicks off.

“I’m excited to bring EDC NY back to the east coast for the 4th year in a row,” said Insomniac CEO and Founder Pasquale Rotella. “The energy and support at last year’s festival laid a path for an even larger production next year! I’m really looking forward to spending another Memorial Day weekend at MetLife Stadium.”

Tickets for EDC New York will go on sale beginning Wednesday, December 17 at noon Eastern Time. Ticket pricing will be revealed on December 10 along with a layaway pricing option. View the EDC New York 2015 teaser trailer.

2014’s EDC NY was the largest to date. The event hosted a crowd of approximately 100,000 attendees throughout the two-day festival. Headliners were treated to an incredible summer extravaganza, as the grounds inside and outside of the stadium played host to electrifying performances, whimsical décor, curated art environments and full-scale carnival rides.

For more information and to stay up to date with the latest Insomniac news, visit www.electricdaisycarnival.com and www.insomniac.com.