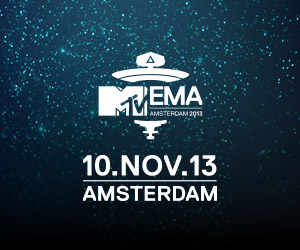 This year, the MTV EMA celebrates its 20th anniversary. And what a celebration! The international music event of the year takes place in the historic Dutch city of Amsterdam, at the brand-new cutting-edge venue the Ziggo Dome. And it’s bound to be bigger, better, and more EMAzing than ever!

Every year, the artists honoured with EMAs are chosen by YOU, the passionate music fans all over the globe, who cast millions of votes to support your idols. And every year, megastars turn out to collect their prizes and rock the house—with stadium-shaking live performances that are literally seen and heard the world over. Whether you’re in Amsterdam for the big event, or opt to watch it on MTV from the comfort of your couch, you’re part of the EMA experience that unites international music fans from the U.K. to the Ukraine, from Brazil to Bali, from Austria to Australia…you get the idea!

Keep checking back for news and updates on who’ll be appearing at the 2013 MTV EMA and what you can look forward to at our epic 20th anniversary event. This is one party you can’t miss!