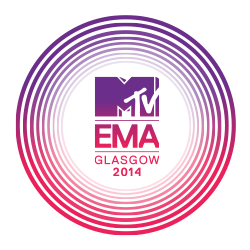 AMSTERDAM– Get ready, Glasgow! MTV has announced that its premier international awards show, the MTV EMA, will be staged in Scotland’s largest city in 2014.

On the eve of this year’s awards in Amsterdam, Bruce Gillmer, Executive Vice President of Talent, Music Programming and Events for Viacom International Media Networks (VIMN), has confirmed that the MTV EMA will celebrate its 20th anniversary in 2014 at Glasgow’s brand new, state-of-the-art venue, The SSE Hydro. Scotland will welcome the world in 2014, and the MTV EMA is the latest major event to join the Homecoming Scotland programme.

It will be the first time that MTV’s global awards show will be held in Glasgow. The event, which showcases the world’s hottest musical acts in a different city each year, has been secured for Scotland following successful discussions between MTV, Glasgow City Marketing Bureau and EventScotland.

“Each year, the MTV EMA is an amazing, multi-platform music experience for our audiences around the world, presented through a dynamic, talent-driven spectacle that only MTV can deliver,” said Gillmer. “As one of the world’s great music cities, Glasgow is always a favourite with artists and the new SSE Hydro will provide the perfect backdrop for the MTV EMA in its 20th year. We’re thrilled that the eyes of the music world will be on Glasgow next year.”

Councillor Gordon Matheson, Leader of Glasgow City Council and Chair of Glasgow City Marketing Bureau, said: “It has been our ambition as part of Glasgow’s major events strategy to attract the MTV EMA for a number of years and I’m delighted that MTV has accepted the city’s invitation. Glasgow proved to be the ideal destination for MTV Crashes in 2010, when Diddy Dirty Money and a fantastic crowd showed MTV’s global audience that Glasgow is a city that knows how to party. Since then, we’ve been working to bring the world’s greatest music event to Glasgow and I’m delighted we can today announce the next chapter in this exciting partnership. Hosting an event of the magnitude and international reach of the MTV EMA reinforces Glasgow’s enviable reputation as one of the world’s leading music cities.”

Scottish Cabinet Secretary for Culture and External Affairs, Fiona Hyslop, said: “2014 is going to be an incredible year for Scotland and it is fantastic news that the MTV EMA will be coming to Glasgow. As a Signature Event on the Homecoming Scotland 2014 programme, we will welcome the world to the EMA and showcase Glasgow and Scotland to nearly 700 million households through MTV’s global network of channels. The awards are a highlight on the global music calendar and next year it is fitting that it should be held in Scotland, the perfect stage for events, in Glasgow’s newest venue, the spectacular SSE Hydro.”

“The MTV EMA excites huge interest amongst British music fans, so it’s fantastic to be bringing the show back to Scotland,” said David Lynn, Executive Vice President and Managing Director for VIMN UK, Australia and Eastern Europe. “The 2003 show in Edinburgh was described as ‘the greatest party to be held in Scotland in a thousand years’; now we’re looking forward to delivering an even bigger and better experience with the 2014 MTV EMA in what will be a momentous year for Scotland and the city of Glasgow.”