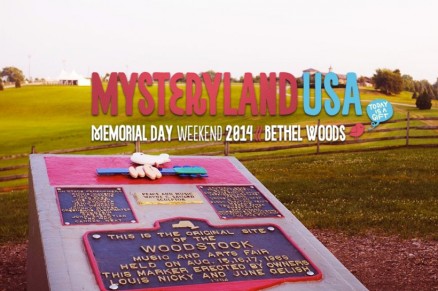 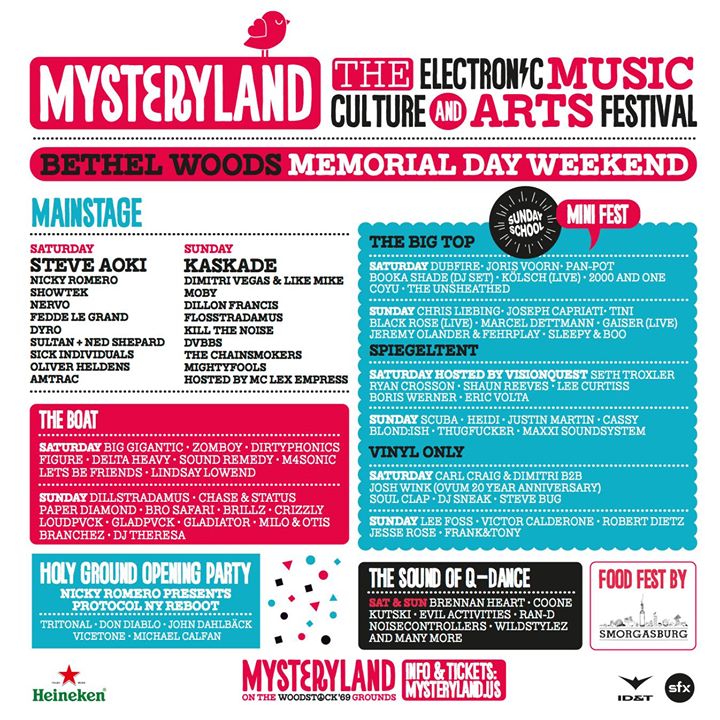 The festival delivers the same mixture of musical genres that has grown to be such a unique factor of this international event, and this first US edition will see a roster of top DJs and cultural acts all of who are ready to make this one very special inaugural edition. With three days of programming and seven distinct musical arenas, the festival creates a melting pot of its famous stage-production and shows, together with over 200 of world-renowned DJs, local up-and-comers, colorful acts, and performers.

Mysteryland USA will take place on Saturday, May 24 and Sunday, May 25, with the campgrounds opening on Friday, May 23. Limited on-site camping will be available on the sacred grounds of ’69 Woodstock at the Holy Ground campsite featuring an exclusive Friday night pre-party. Additional off-site camping will be offered through our local partner program.

On Friday evening all those who are camping on the Holy Ground are treated to a special pre-party hosted by Dutch phenom Nicky Romero’s ‘Protocol’ label, inviting some of his most talented residents to kick-start the festival.

The Mysteryland Main Stage, a newly designed stage set to debut in the US and represent the nomadic journey of the Mysteryland festivals, will host a plethora of ‘A-listers’ and up-and-comers. On Saturday, Mysteryland alumnus Steve Aoki will close the main stage, following performances by Nicky Romero, Showtek, NERVO, Fedde Le Grand amongst many others.

On Sunday, Mysteryland is proud to present a special closing set by the American powerhouse Kaskade. The spectacle will continue with electronic music pioneer Moby, Dimitri Vegas & Like Mike, Dillon Francis, Flosstradamus, and more.

The previously announced Sunday School Mini-Fest will host some of the best underground talent, divided over three extravagant areas. The Big Top tent will bring techno heavy weights Dubfire, Joris Voorn, Chris Liebing, Joseph Capriati, Pan-Pot and many more. The uniquely designed wood & mirrored Spiegeltent will host the only Visionquest showcase of the year featuring all four founding members: Seth Troxler, Ryan Crosson, Shaun Reeves, Lee Curtiss, with fellow label cohorts. On Sunday, Spiegeltent will bring together fan favorites: Scuba, Heidi, Justin Martin, Cassy, and others. For the first time ever, Sunday School is presenting a Vinyl-Only stage by creating an intimate club environment to bring back this lost art and offer the experience of the warm tones and rich analog sound that only vinyl can offer. Special performances will include a back-to-back set between Carl Craig and Dutch legend Dimitri, a 20th OVUM label anniversary with Josh Wink, Lee Foss, Soul Clap, Victor Calderone and more.

One of Mysteryland’s signature stages, The Boat, which has traveled around the world from The Netherlands to Chile, will bring today’s current bass and trap sounds from the scene’s leading artists such as, Big Gigantic, Chase & Status, Zomboy, Paper Diamond, Bro Safari, and many more. For a very special closing set, The Boat is proud to announce the official debut of the Dillon Francis + Flosstradamus supergroup: Dillstradamus. Get ready to turn up!

For over 12 years Mysteryland has championed Q-dance, which explores the harder styles in dance music in an indoor tent, where all of those who are in search of faster BPM’s can escape and let loose. This will be Q-dance’s first Northeast showcase after its US debut in 2012, and an ongoing West Coast tour.

Artistic Line-up
In the past 20 years Mysteryland has developed into one of the most groundbreaking, trendsetting festivals in the world due to the diverse settings and experiential environments within the festival that compliments the festival’s cutting-edge musical programming. This path of creativity will be continued for this year’s first edition in Bethel, NY, as fans will be able to discover new worlds and art.

Captivating art installations and theatrical performances can be found all throughout the festival sire, with unique pieces by Dutch artists Dadara, international flag artist Angus Watt, a wishing tree by Kate Raudenbusch, and The Lucent Dossier Experience known for their over the top, unique stage performances.

Exploration of the worlds can begin in The Healing Garden, a place to discover new ways of thinking and getting in touch with your spiritual side through yoga, meditation, and chill-out music. The Healing Garden is situated on the Ceremony Field, the site of the official festival opening ceremony. Additional areas include a romantic Love Chapel, a rodeo, the Mysteryland Post Office, the Confessional, a festival library, live painting by New York street artists which pieces are up for auction after the festival for charity, Sin Salida by native Amsterdam creative collective and, in true Mysteryland style, dozens of secret areas waiting for you to discover.

Holy Ground campers will be able to gather at the community-oriented Camping Circus stage. This area will host creative artists and alternative musical programming, including jazz and indie music throughout the weekend.