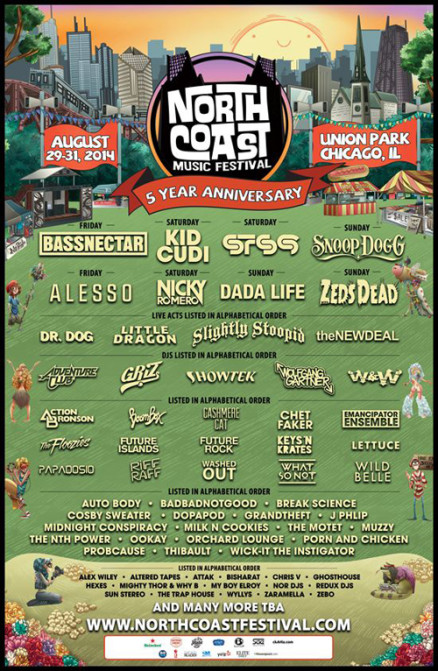 In 2014, North Coast Music Festival is expanding the grounds by opening new sections of Union Park to the general public. The festival is also reconfiguring stage placements and streamlining traffic flows in and around the park. The upgraded NCMF VIP Experience also features air-conditioned restroom trailers, expanded bar options with spirits and mixed drinks, free bottled water, express entry, reserved viewing areas, complimentary cell phone charging stations, and much more. The NCMF VIP Experience is strictly for those 21 years of age and older, so you can enjoy your festival experience with your peers.

North Coast Music Festival was originally founded in 2010 by a group of independent promoters who set out to produce a festival for all the underserved genres in the city. Between them, they brought together emerging artists from hip-hop, indie, jam bands, and dance music to create one of Chicago’s most unique festivals. Some of the these artists from previous years are now headlining festivals across the world. “We’re humbled by the support here in our fifth year anniversary”, says Pat Grumley, one of the founders of the festival. Adds Michael Berg, “When we first conceptualized this festival, we had no way to knowing it would be so warmly received by the city of Chicago, the artists and their respective teams like it has… but far and away the most rewarding and inspiring thing to our team is the support of our fans, who we call ‘the coasties!’”