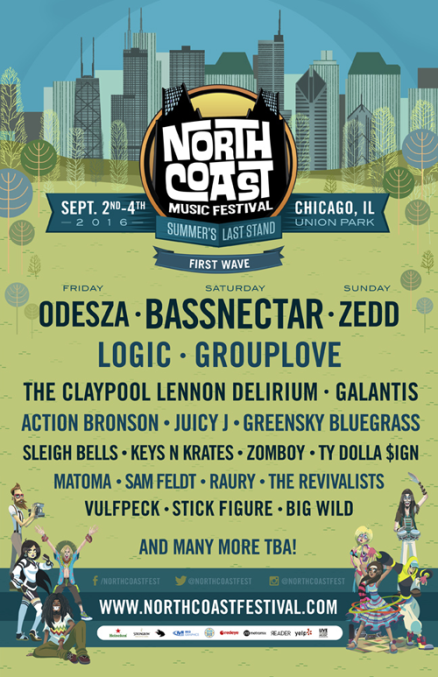 General Admission and VIP Three-Day Passes Are On Sale Now at northcoastfestival.com!

Year after year North Coast’s all-embracing roster spans genres from dance to hip-hop, indie, funk, jam bands, and everything else sprinkled in between. This year’s headlining artists include ingenious DJ/producer BASSNECTAR making his triumphant return to North Coast, along with influential breakout duo ODESZA making their headlining NCMF debut, and international superstar, ZEDD.

Another notable North Coast first is Les Claypool of Primus’ brainchild, THE CLAYPOOL LENNON DELIRIUM, a new collaborative project with Sean Lennon (Son of John Lennon) will perform. The pair rounds out their massive Summer tour with their first ever Chicago performance at NCMF, in celebration of their debut collaborative LP, set for release this June.

Returning to the fest for the second time is everyone’s favorite Chef-turned-MC ACTION BRONSON who recently released a widely popular web food series called “F*ck That’s Delicious” via VICE’s Viceland channel. Toronto-based electro purveyors KEYS & KRATES will also be returning as North Coast veterans, to once again create incredible memories for festival goers from all over the nation.

Stayed tuned for the Phase Two lineup announcement, which will continue to deliver an eclectic mix of musical genres that has grown to be such a unique factor of this Chicago event. Heineken is once again the official adult beverage partner of North Coast. More details will follow on the return of the Heineken House!