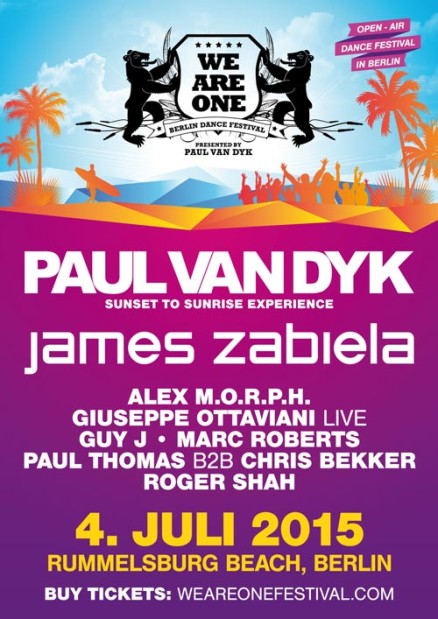 Over the relatively short lifetime of PvD’s unification commemorations, the We Are One festivals have rocked their O2 World and Zitadelle Spandau settings down to their respective foundations. Featuring performances from Eric Prydz, Armin van Buuren, Underworld and many others, the first 3 events have brought capacity crowds of clubbers & music lovers flocking to the German capital from all over Europe and beyond.

Having box-ticked Berlin’s arenas and citadels, 2015 sees We Are One spread it wings further, with the festival hitting the beach! Set on the banks of the River Spree with swaying palms, Tiki bars, BBQ stands and sand & water as far as the eye can see, Rummelsburg Beach provides this year’s idyllic, couldn’t-be-more-summer-like setting!

Over the course of We Are One 2015, PvD will perform a sunset-to-sunrise set playing over a 10-hour duration between the beach and its top-secret nighttime location. Details of two full stages’ worth of guest DJ stars are coming over the next 4 weeks. In the meantime, We Are One-ers, get ready to come alive again! This July 4th, you’ll feel the sand between your toes and create some new, very special WAO memories because PvD’s taking it to the beach!