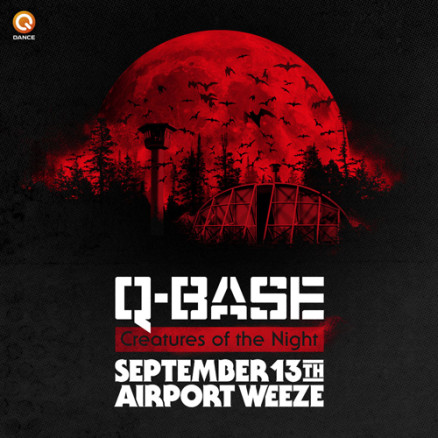 On September 18th of the year 2004, Q-dance gave birth to its first international concept: Q-BASE. On the outskirts of the town of Weeze, just across the German border, an abandoned Royal Air Force base was claimed as a territory for what would become a legendary day and night festival. Ten years later, it still defends an unmatched status. Die-hards with a refined and trained taste for hard and heavy music come together to be dragged from the light into the dark under the guidance of music. But what makes Q-BASE so unique?

An essential and indispensable part of the experience is buried in its location. It is a setting with an underground atmosphere and a feeling that can’t be found at any other outdoor event. During the day, it is already a special and impressive sight to behold, yet during the night it flourishes to its fullest capacity. Where revolution, freedom and anarchy are written in the walls, raw shaped bunkers and ammo units form dark silhouettes, connecting to rough asphalt airstrips. From where you stand, you will see an obscure hangar through the trees and you will hear the loud sounds escaping its doors. Once inside, you will experience its essence and become one with the vibe. Strolling around this unique terrain by night is an adventure on itself. It is like you’re being caught in a thrilling movie script. However, it is mere reality that you find yourself in. On September 13th, the ‘Creatures of the Night’ will make this setting their home. Will you be one of them? Come and discover these mystic grounds.