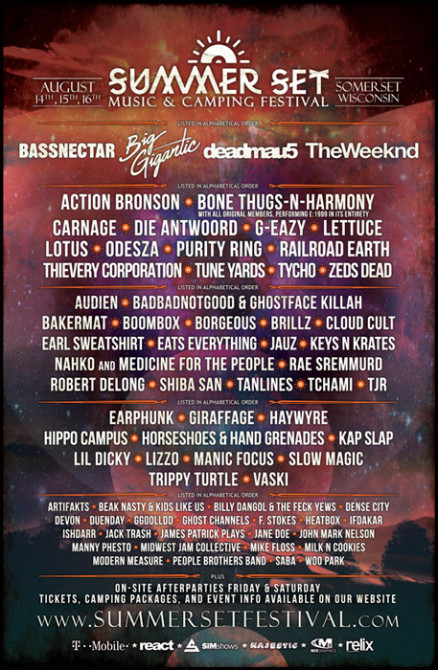 The fourth annual Summer Set Music and Camping Festival (SSMF) returns to the beautiful Somerset Amphitheater in Northern Wisconsin with the festival’s most impressive lineup yet. Known for showcasing an eclectic mix of hip-hop, indie, and jam-style artists alongside some of electronic dance music’s most sought after producers and DJs, SSMF is set to deliver a diverse lineup featuring over 70 artists, performing across five stages.

This year’s headliners include dance music phenomenon DEADMAU5, which marks his only announced Midwest festival appearance, mysterious R&B mega-sensation THE WEEKND, and bass music innovator BASSNECTAR, who returns after an unforgettable set in 2014. Summer Set mainstays BIG GIGANTIC will also return for their fourth year with a very special jam session. Featuring a wide variety of performers across multiple genres, other artists include Action Bronson, Rae Sremmurd, Die Antwoord, and Earl Sweatshirt to Thievery Corporation, Lotus, Odesza, Tune Yards, Shiba San, Carnage, Tchami, and more to round out the bill.

As Summer Set continues to grow, the festival grounds will once again expand to provide music enthusiasts with the ultimate experience and atmosphere. For the second year in a row, the festival adds another stage with increased production, bringing the total number of stages to five. The new stage, dubbed A Live One, will feature critically acclaimed bands with live performances from Purity Ring, Tycho, Tanlines, Lettuce, Railroad Earth, and many more.

2015 marks a special year for Summer Set’s hip-hop fans as Wu Tang’s Ghostface Killah hits the stage with Toronto jazz trio BADBADNOTGOOD for one of their notorious live performances. Additionally, in celebration of the 20-year anniversary since the release of their renowned second album, which includes the Grammy Award-Winning Song “Tha Crossroads,” Bone Thugs-N-Harmony will be performing their full-length album E. 1999 Eternal in full.

To accompany the eclectic lineup, Summer Set provides festival-goers with affordable VIP camping packages that offers unrivaled amenities and perks, including private restrooms and showers, full assistance from dedicated VIP staff members, access to all after parties, and private viewing areas at the Main Stage and Grove Stage, plus much more. Attendees will be provided with preferred on-site parking and advanced entry to “The Woods” VIP campgrounds, beginning on Thursday August 14th at 4:00 pm, ahead of the General Admission ticket holders. Free professional massages, and an additional mini-stage featuring intimate DJ sets exclusive to VIP campers, will also join the VIP amenities in 2015.

SSMF has taken extensive fan feedback into consideration and is dedicated to providing the best possible experience year after year for the fans and artists. Camping prices have been significantly reduced, starting as low as $99 per campsite, which equals roughly $22/person to camp for the weekend, and there will be more experiential interactive elements than in past years.