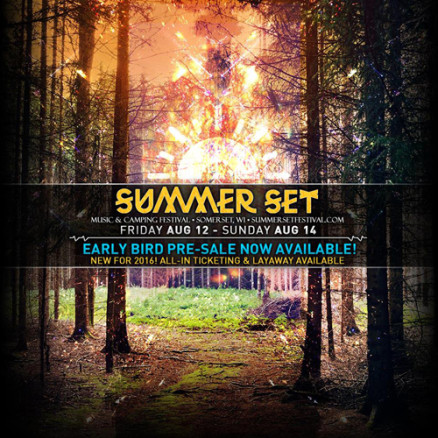 Summer Set Music & Camping Festival (SSMF) is thrilled to announce its return to the beautiful Somerset Amphitheater in Northern Wisconsin on Friday, August 12th through Sunday, August 14th, 2016.  In honor of its fifth anniversary, Summer Set will feature convenient all-in-one ticketing options for the first time ever!  To make it easier on our fans, wristbands now include both festival and camping accommodations in one purchase.  Check out the various all-in-one ticketing options HERE, and don’t miss your chance to get tickets at the lowest price available.  A limited number of pre-sale tickets are on sale now at summersetfestival.com.

Known for showcasing an eclectic mix of hip-hop, indie, and jam-style artists alongside some of electronic dance music’s most sought after producers and DJs, Summer Set continues to deliver a legendary and diverse lineup year after year.  In 2015, the 3-day festival featured four massive headliners including Deadmau5, The Weeknd, Bassnectar, and Big Gigantic, along with 70+ artists!

Relive the magic of SSMF, and watch the 2015 recap video below: