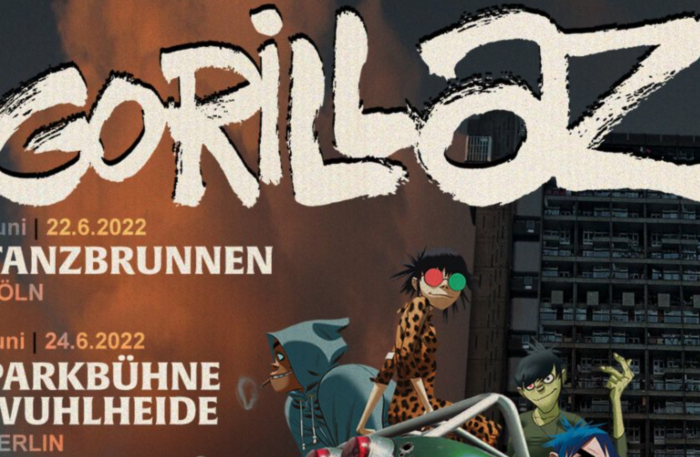 Gorillaz Back in Germany – Live in June 2022

According to the Guinness Book of Records, they are the “most successful virtual band”. Virtual indeed, but the Gorrillaz are still a very real collective of artists who, under the guidance of Damon Albarn, repeatedly conjure musical surprises with the magic painted by comic artist Jamie Hewlett.

For 22 years now, the Gorillaz have been doing their “mischief”, and it is still fun to follow the virtual adventures of 2D, Murdoc, Noodle and Russel, and to be surprised by the musical inventiveness of Albarn and his comrades-in-arms.

The latest Gorillaz chapter called “Song Machine” proves their artistry once again. Since the end of January this year, Albarn and Co. have released a new “episode” in the form of a song each month. Each song is accompanied by a great video in which the guests meet the virtual band members. In the official statement, comic drummer Russel explains: “Song Machine is a whole new way of doing what we do. The Gorillaz break the form because the form has grown old. The world moves faster than an overloaded particle, so we have to be ready to let ourselves down. We don’t even know who’s going to come through the studio door next.” The collection, which has now been released as an album – which could also be thought of as a “first season” – is a wonderful gathering of generations and nations in which the UK rap artists such as Octavian or Slowthaiare are on board, as well as icons in the league of Robert Smith, Peter Hook or the late Tony Allen. With the Malian singer Fatoumata Diawara, Albarn bridges the gap of his work with the non profit organization, Africa Express.

The fact that the Gorillaz can also work wonderfully live may not have been expected, but this is exactly what they have proven on several occasions, always playing the grandiose visuals at the right moment and bringing an impressive cast to the stage with each tour. Sometimes with the big names like the late Bobby Womack, or even with fresh talents like Little Simz or Little Dragon singer Yukimi Nagano. If all goes well and the “Strange Timez” begin to normalize, the Gorillaz will stop in Germany for two shows in the summer of 2022. Whether you are a comic book fan or a music fan, make sure not to miss this!

Tickets for Gorillaz are sold exclusively in a personalized manner. Personalized means that each ticket is tied to only one person, whos name is on the ticket. This person is the holder of the right to visit and only this person will be admitted to the event.

There is a limit of a maximum of 6 tickets per customer.

The personalisation of tickets and the limited number of tickets are done for reasons of fairness and to avoid a secondary market where tickets are often offered at inflated prices.

This special and conscious regulation of pre-sales is intended to give as many fans as possible the opportunity to buy tickets at fair prices.

Official online pre-sales are carried out exclusively through tickets.de, and all other ticket providers offering tickets for sale are NOT AUTHORIZED providers.