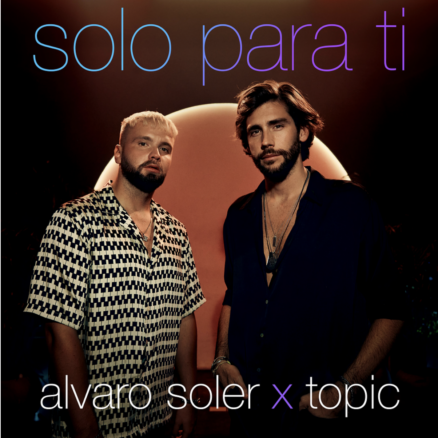 With his recent smash ‘In Your Arms (For An Angel)’ recently passing 20 million streams, German star Topic has already been dominating the scene this year. He now looks to go further still with another big crossover single in collaboration with Spanish-German singer, Alvaro Soler—who has scored Top 10 hits and albums across Europe.

‘Sola Para Ti’ is a beautiful track which keeps you guessing with its slow-building changes. It begins life with a touch of balladry, before Soler’s sensual vocal sparkles into life over a house beat, melodic bass throbs and sorrowful piano chords. The chorus adds more Latin flavour with its off-beat guitars, kalimbas, and powerful, dramatic vocal harmonies. Combining Topic’s uplifting electronic sound with Soler’s undeniable pop talents makes this a track of wonderful contrasts and subtle power. It has all the hallmarks of a big summer anthem, made for beaches, open-air parties, and holiday romances. A dramatic video shot in Mexico accompanies the new track, telling the tale of a woman torn between two lovers—played by Topic and Soler—which brings the track to life in bold fashion.

On the collaboration, Topic says: “I had been following Alvaro for a long time when the idea came up to do a track together. I’ve always been interested in combining Spanish-language songs with dance elements, and so we met in a recording studio in Berlin. The first version of ‘Solo Para Ti’ was created in just two days during intensive team sessions and we couldn’t be prouder of the result.”

Alvaro Soler describes the cooperation as particularly organic: “I’ve known Topic for a long time and I was extremely happy to see his worldwide breakthrough and success. For me he is one of the dopest DJs in recent years and to do a track with him was such a cool experience. I’m super happy with the result and really proud of the song. Of course, I’m entering a new world with ‘Solo Para Ti’ because I had nothing to do with EDM before, but I’m looking forward to surprising people with it.”

Topic is one of the biggest names in dance music, with over 1 billion streams to his name in 2021 alone. He received a huge accolade this year in being nominated for the BRIT Awards for Best International Song for ‘Your Love (9PM)’, his collaboration with ATB and A7S, and with performances coming up this summer at the very biggest festivals like Tomorrowland and Parookaville, he has a huge season ahead.