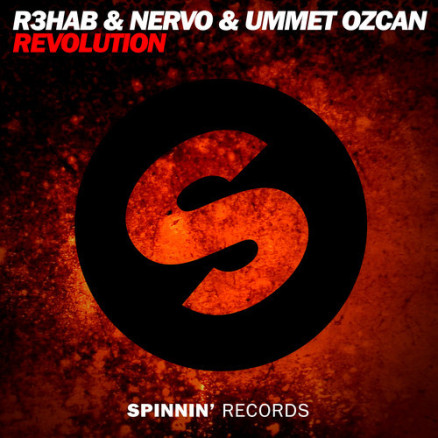 R3hab, NERVO and Ummet Ozcan team up for booming ‘Revolution’

November 15, 2013 – Some collaborations are meant to be. When three of today’s biggest and most outspoken producers team-up nothing but a true revolutionary sound is born. The combination of R3hab’s insane beats, NERVO’S characteristic sound and Ummet Ozcan’s stunning electro synths take ‘Revolution’ to new hights.

This release is beyond many clubbers’ dreams, with a line-up that hardly needs an introduction, we do like to give you some facts.

Dutch DJ R3hab as one of the proponents of the modern clubsound, who likes his music a bit darker, he collaborated with the likes of Hardwell and produced official remixes for artists such as Calvin Harris, Lady Gaga, Rihanna, Ellie Goulding, Katy Perry and many more! R3hab has proven to be an established name in the scene. With his unique style and great skills in both producing and remixing, it’s a no brainer that he won the IDMA Best Breakthrough Artist Award last year at Miami Music Week.

Aussie sisters Mim and Liv Nervo are regular performers on festival Main Stages around the world including Tomorrowland, Ultra Music Festival, Creamfields, Electric Daisy Carnival and more… NERVO recently ranked #16 in the 2013 DJ Mag Top 100 Poll. In addition, Mim and Liv have also been recognized for their songwriting talents; they co-wrote ‘When Love Takes Over’, David Guetta and Kelly Rowland’s Grammy award winning single which also ranked as the #1 Dance Pop collaboration of all time by Billboard. Collaborations with Afrojack, Steve Aoki, and Nicky Romero followed in their amazing career. Big hits, big talent. These girls are ready to take over the world with another great collab.

Last but not least; Top 100 DJ/Producer Ummet Ozcan, also from The Netherlands, showed the world that he had something different to offer after his genre-defying #1 smash hit “The Box”,  and his last hits include ‘Reboot’, ‘Here & Now, ‘Airport’ and ‘The Cube’.  His track ‘The Code’, a collaboration with W&W, became a #1 hit on Beatport and was one of his biggest records, being played in every DJ’s set and was acclaimed as the unofficial anthem of last years Ultra Music Festival. With support from the worlds biggest DJ’s such as Hardwell, Avicii, Tiesto, Afrojack, Dimitri Vegas & Like Mike, Nicky Romero, W&W and Sander van Doorn – we hope he’s ready for a revolution on the dancefloors!