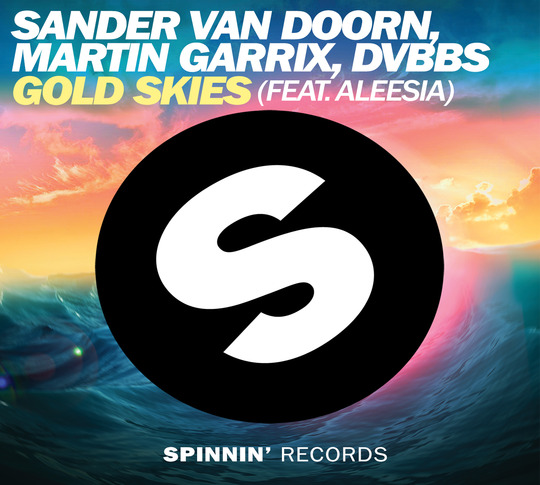 The wait is over! It’s finally here: The massive new collaboration “Gold Skies” between Sander van Doorn, Martin Garrix and DVBBS!
A song that has all the artists stepping out of their normal styles and colliding forces for an infectious summer ready progressive house heater!
Gold Skies couldn’t be more fit to be one of the biggest 2014 summer festival anthems.  You’ve already heard this starting to get played out by countless DJs and today we’re happy and proud to announce the official release on Spinnin’ Records!

The DVBBS brothers initiated the idea for the track, who sent their demo over to Spinnin‘ which then connected them to Sander van Doorn and Martin Garrix.
“Gold Skies” is the type of track that makes you feel something. With its alluring vocals, powerful build-ups, and beautiful breakdowns, this progressive track is both full of passion and zest. It is not the typical sound of van Doorn, Garrix or DVBBS– it is the perfect combination of all three artist styles infused with the incredible vocals from Aleesia.

With a premiere at the world leading music authority ‘Rolling Stone’ and the support of the entire BBCR1 crew, consisting of Zane Lowe, Pete Tong en Danny Howard, ‘Gold Skies’ is  going global fast! On top of that the collaboration got cheered by Hardwell, Nicky Romero, David Guetta, Armin van Buuren, Dimitri Vegas & Like Mike, Showtek, Ummet Ozcan and many, many more.

Sander van Doorn
Sander van Doorn is without a doubt one of the world’s most essential, influential and popular DJ/Producers in dance music today. Sander has become synonymous with excellence – both production wise and in front of the thousands he plays to, nightly. He is truly one of the strongholds in dance music. Next to his own Dj career, his label DOORN Records, that released DVBBS debut hitsingle ‘Tsunami’ last year, has grown as one of the worlds most highly acclaimed recordlabels.

Martin Garrix
Just turned 18, Martin Garrix is the hottest kid on the worldwide dance block. Awarded with multiple IDMAs, hitting 250 million Youtube views for ‘Animals’, being the youngest DJ who topped major charts such as Beatport and in the UK with multiple releases; it’s fair to say that 2013 has solidified him as a bona fide record-breaking phenomenon. It resulted in main stage appearances at Ultra Miami, Coachella, EDC New York and numerous gigs around the globe.

DVBBS
The Canadian brotherly DJ/producer duo have catapulted themselves into the most happening genre of the music industry at this moment in time, entering the scene in 2013 with the #1 club track of the year ‘Tsunami’. Ever since, DVBBS have showed no sign of slowing down, playing the biggest club shows and festivals all over world, including Ultra Music Festival, Mysteryland, EDC, Tomorrowland and their own “Never Stop The F*cking Rave” World Tour.  With ‘Gold Skies’ they’ll definitely put the biggest smile on their fans faces!
Get ready for this progressive festival main stage bomb of epic proportions and of unparalleled production quality…. Gold Skies is ready to take over the world!