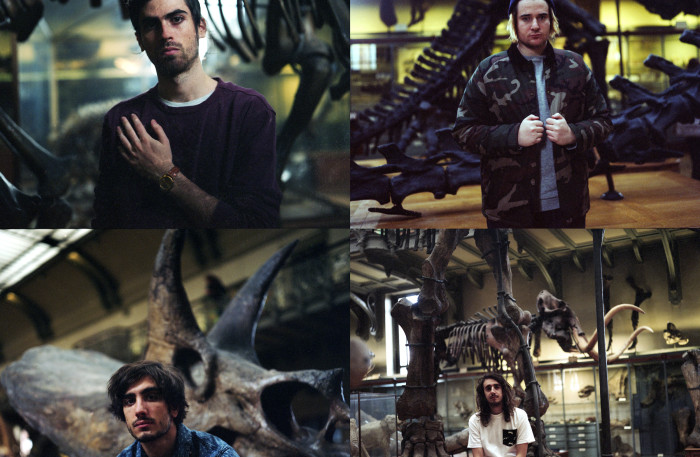 How did you come together as a band?

We started to play on the weekend when we were in high school, just for fun. And after that we started to record some of our own songs. It was very natural. And after all the repetition we decided to be a band. We called ourselves “Quadricolor” and then “Griefjoy”.

What made you change your name from “Quadricolor” to “Griefjoy”?

We started the band and we were very young, about 16. And we wanted a name that represented our music better, so ‘Griefjoy’ has two positive emotions. The grief and the joy. And that’s what we put into our music. We don’t think about melody or not, we just put a little bit of grief and a little bit of joy in it, and that’s it. That’s why we chose that name.

Which song means the most to you? Which is your favorite song and why?

How does the songwriting process look like? Who does what?

I always compose the music first, I compose the piano parts and the melody. After that we are all working on it. With the computer we add some electronic beats, some sounds, the guitar… The music is not really different from the beginning when it’s finished but we have this sound, that we put in every music we have. After we finished a song we send it to Sylvain Autran, the writer, and together we decide what we want to express with the song, what the topic should be and I put words on my melody.

Phoenix is really an inspiration for us. They are French and so we are really interested in their career. How can you be an international band when you are French, it is a difficult question. Not so many bands can make it. Working with Stéphane was very constructive. He has this feeling about how a song must sound. He only has to listen to it a couple of times and then he decides which direction it should take. You can talk to him two hours and try to convince him to take a different direction, but when he decides something you can’t make him change his mind.

With the past band ‘Quadricolor’ we just had a few gigs in France. After all these shows we decided to play more electronic stuff because it is the only way to turn up the audience and the crowd. We like that kind of music and for the live show we want to be more like this.

What was the best concert you played so far and why?

We played in Lorient in November, at a festival called “Les Les Indisciplinées”. There was a band called “Fauve” – and in France they are huge. They are very young but they are really special, you cannot compare them with anything else. The show was so loud and we played in front of 2000 or 3000 people. And the people were very young, participative and active. They were jumping and dancing. We had a really good time there.

How was it here in Germany and on tour with Fenech Soler?

It was a great experience for us. We played in Germany before, it was at the Reeperbahn Festival in Hamburg. But that was really different because it was a festival. Being a support band for Fenech Soler was really great. They are really cool. So it was easier for us being on tour. We discovered so many cities like Cologne,  Berlin etc. and all the venues were not sold out but close to. It was cool to play in a different country in front of so many people.

How would you describe the music in your own word – a mixture of electro pop, indie?

Like I said earlier we want to put emotions into our music. We don’t have the obligation to always put electronic elements or pop into our music – it’s more like we want the emotions to be present. Anyway I could describe it as electronic beats, some classical maybe because my parts with the piano are inspired by a classical composer. Maybe we can use the term “hybrid pop”, because this is a mix of many many influences.

Who has which role in the band?

You made a Spotify Session – how was it to play in front of a very intimate audience?

It was private. It was cozy. It was an acoustic version of our set. So it was very intimate, very cool.

You made a remix of “That’s alright” by Laura Mvula – are you still in touch with her and was it something that you wanted to do?

In France she is signed on the same label as we are so they asked me if I want to do that. I don’t do that very often but I liked it. It was the perfect moment to do it. It was a pleasure because I love her album.

In France you have a stable fan base and now in Germany it is your first tour, you’re getting to know the people and the country, in which country would you like to transport your music the most?

We’re really happy to play in Germany. Germany is an important country for us. United Kingdom too, would be great. The US is like to moon for the NASA… And maybe Canada too. I don’t know, everywhere. And Japan, Billy likes Japan, because he is a fan of the culture.

What are the next steps for GRIEFJOY in the future?

We will start another tour by the end of January for about five months. We’ll start in France. There we start to fill up a whole venue with people. We’re really happy because of that. We already think about the future and the next LP. We want to see how this LP is received by the people and plan the next steps after that.